Up until yesterday, the North Korean regime had only made informal denouncements of our program Flash Drives for Freedom. But yesterday, the North Korean dictatorship denounced it in its state-run newspaper, Minju Choson. Unlike the DPRK’s Rodung Sinmun — a newspaper that serves a communications channel to spread propaganda to citizens — Minju Choson is the main print outlet of the Cabinet of North Korea and is read daily by regime officials.

In the article, the regime criticizes the Human Rights Foundation, Buena’s client, efforts to send information into North Korea as a “wild dream of those who are utterly ignorant of the DPRK” and states that our campaign’s “ill design can never work.” According to HRF’s North Korean sources, the dictatorship published this in Minju Choson to make all regime officials aware of the campaign.

View the English translation of the official statement here: 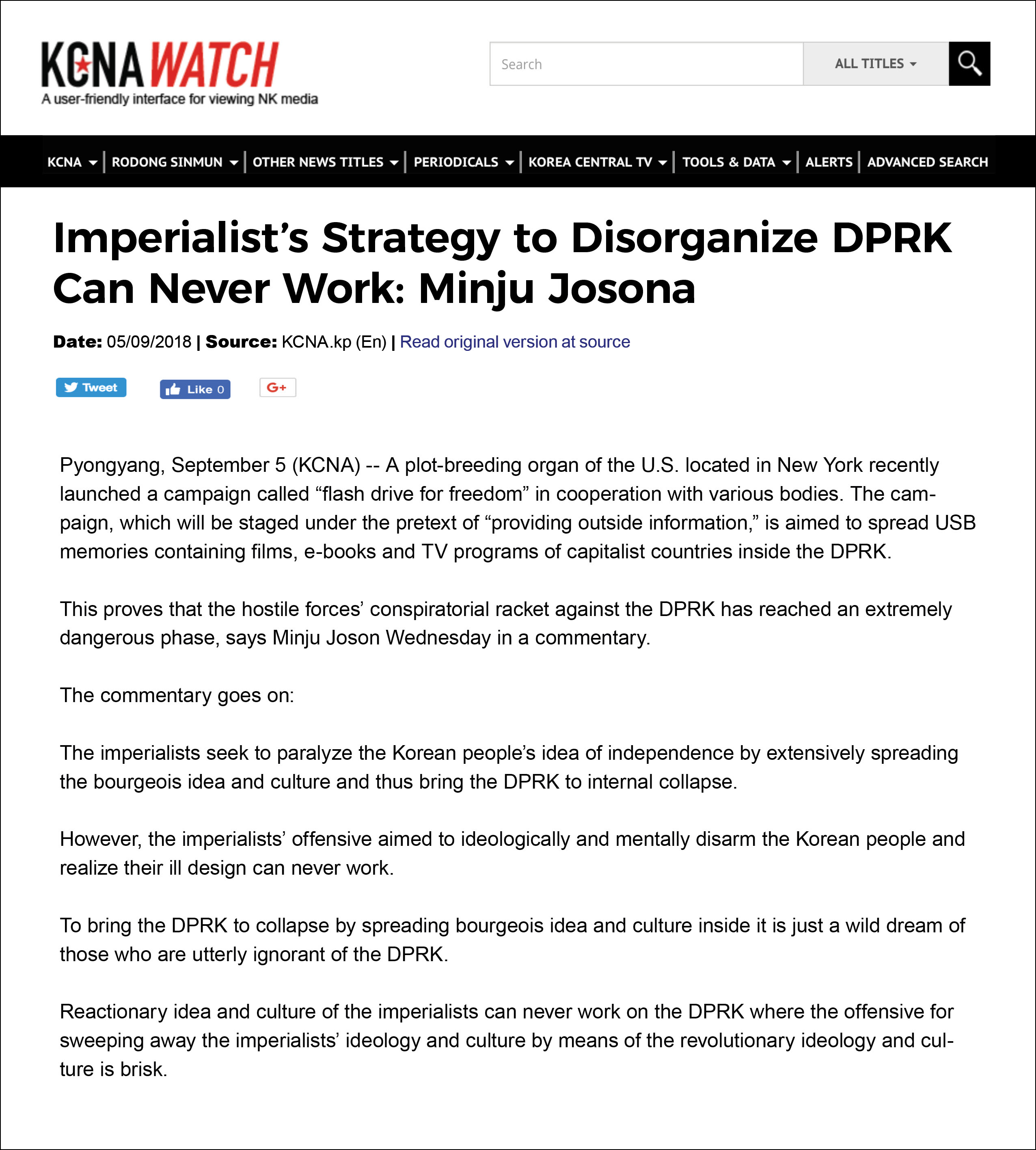 “This is not the first time that Kim Jong-un and his cronies have recognized and criticized the efforts of the Human Rights Foundation to promote freedom inside North Korea,” said HRF Chairman Garry Kasparov. “It is particularly striking that they call out our Flash Drives for Freedom campaign by name. We see this as a significant development and evidence that the regime is afraid that our effort to send massive amounts of information into North Korea is having an impact.”

HRF has supported the work of North Korean defectors and refugees since 2009 by hosting them at the Oslo Freedom Forum, bringing them to Silicon Valley to meet investors and technologists, assisting their efforts to send information into North Korea, and creating the world’s first hackathon for North Korea. HRF founded Flash Drives for Freedom in 2016 to disrupt Kim Jong-un’s propaganda machine by collecting USB drives, loading them up with pop culture, news, and video content, and getting them into the hands of the North Korean people, who live under the most dire conditions and are prevented from accessing the internet. With the generosity of donors from around the world and expertise from North Korean defector organizations, HRF has been able to send more than 70,000 USB sticks into North Korea.

The Flash Drives for Freedom campaign has been featured in TIME, BBC News, CNN, WIRED, MSNBC, Fast Company, The Economist, ReasonTV, PBS, Quartz, Fox News, The Globe and Mail, The New York Post, PC Magazine, The Guardian, Business Insider, USA Today, and many other international media outlets, informing tens of millions of people about how anyone can get involved in the struggle to promote human rights inside North Korea.